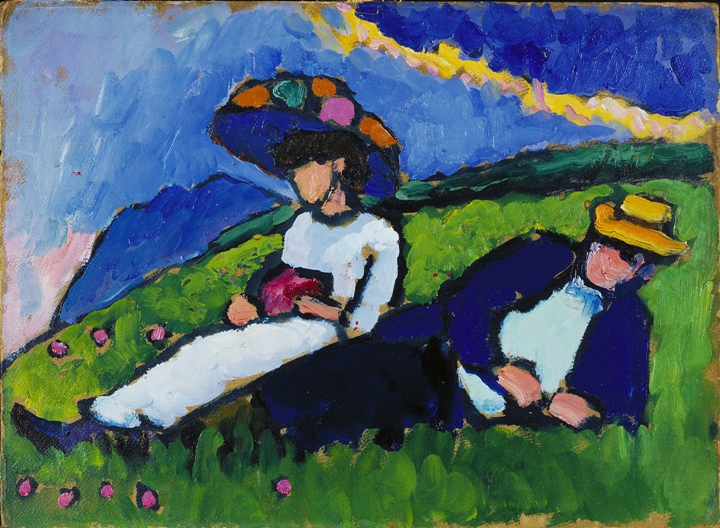 Originally expressionism was more of a cultural movement, specializing in poetry and painting, based in Germany at the beginning of the 20th century. It aimed to portray the world in a specifically objective perspective often wildly distorting it so as to engender high levels of emotional moods and ideas. The artists concerned wanted to stimulate a feeling of ‘being alive’ at the emotional rather than physical level.

Expressionism was very much an ‘avant-garde movement’ in poetry and painting before the onset of the 1914—18 First World War with mass appeal, probably reaching it’s highest peak towards the middle of the 1920s, particularly in Berlin.

Most of the ‘Arts’ embrace expressionism but the term is generally reserved for 20th century works. Many considered the expressionist artists as turning to this culture in direct reaction to the established methods of realism and impressionism of the time. Upon visiting the Paris galleries, artist such as Macke and Marc realised that a new Germanic style was needed.

You can identify the heightened emotional turbulence associated with expressionism by looking at the latter part of Dutch painter Van Gough’s lifetime work, particularly ‘Starry Night’. It is very obvious he is set upon expressing his intense feelings towards the world.

Contrary to popular belief, although it is used as a term of reference, there has never been a distinct movement which called itself “expressionism”. The term is usually linked to paintings and graphic work in Germany at the turn of the century which challenged the academic traditions, particularly through the Die Brucke and Der Blaue Reiter groups.

Arguably, all artists are expressive but there is a long line of art production in which heavy emphasis is placed on communication through emotion. Such art often occurs during time of social upheaval, and through the tradition of graphic art there is a powerful and moving record of chaos in Europe. At the time the art may be unimpressive aesthetically, but almost without exception has the capacity to move the viewer to strong emotions with the drama and often horror of the scenes depicted.

Czech art historian Antonín Matějček in 1910 described the culture as the opposite of impressionism. ‘The expressionist wishes, above all, to express himself. An Expressionist rejects immediate perception and builds on more complex psychic structures…..impressions and mental images that pass through mental peoples soul as through a filter which rids them of all substantial accretions to produce their clear essence are assimilated and condense into more general forms, into types, which he transcribes through simple short-hand formulae and symbols.’